Delphi Tour 2017 in May is confirmed to visit 11 cities in Brazil to present its new 10.2 Tokyo version!!

The RAD Studio Delphi IDE now includes its first LLVM based Linux compiler for Enterprise development, enabling Delphi developers to target 64-bit Intel Linux servers and devices. The Linux compiler is certified for Ubuntu Server (LTS 16.04) and RedHat Enterprise (V7) and is built on top of the LLVM engine. ARC is enabled for effective memory management, while to ensure compatibility with code written for Windows Server, one based strings are used by default.

DelphiⓇ is the nimble Object Pascal IDE and component library for cross-platform native app development with flexible Cloud services and broad IoT connectivity. Compile natively for fast Linux and Windows server support and reach the widest audience with App Store support for Windows 10, macOS, iOS and Android – all from the same native code base – in the first IDE with integrated Windows 10 Desktop Bridge Support.

The Delphi Tour event is free and this year it will visit 11 cities in Brazil to present its new 10.2 Tokyo version! Below you find a complete list of cities to be visited and you can click here to subscribe for free! 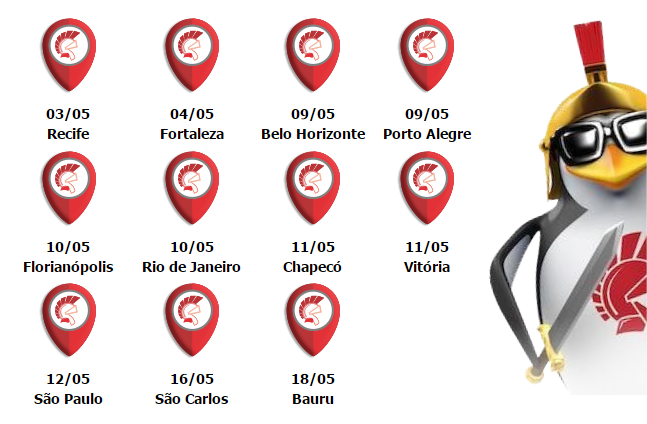 According to official Embarcadero information published in 2015, there are Delphi developers in 241 Countries and Brazil is in 6th place in number of licences sold (paid versions, NOT free or trial or pirated).

Just for you to understand how big is Brazil and how strong is Delphi in our country I have prepared this map showing the 11 cities that will receive the Delphi Tour Brazil 2017… the tour will actually travel 10,878 kilometers!

This video was made and shared on social media networks in order to invite the Brazilian developer community to join the event (pt-BR spoken)!

Let me know if you ever need software localization and/or support in Brazil, regarding Delphi or any other development technology! I will be glad to help!