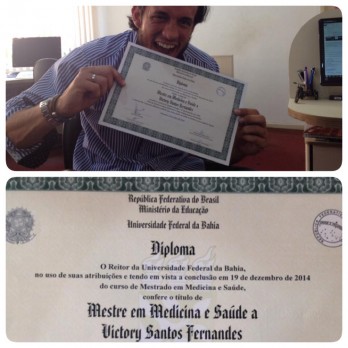 First of all it important for you to know that I am just a regular guy… Definitely not a genius in any sort of way… Maybe little geek, I assume… But on top of all I am a hard-worker, I stand for my dreams!

It was 2005 when I first saw a robotics competition… From that day on my life changed! I was definitely not the same as I could not stop thinking that I was an Electrical Engineer and I was not sure if I could do what those engineering students were doing… How come I had never developed I complete robotic project from sketch?! I was going deep into software development for some years but not into electronics… not into embed development and micro-controllers… It came to me that I was not connecting all the dots and that I could do more… I could further…  I needed to go beyond!

From that day on I would gather with friends all saturdays mornings and we started to develop autonomous Sumo robots based on international competition standards and rules. Before having our first robot we realized that we had no one to compete with in our city and that there were no local competitions going too. So we started to teach and inspire other teams… we planned and organized the first local competitions… and from 2006 to 2012 we had yearly competitions going on and in five years the state of Bahia became well know in the Brazilian robotics scenario. I have worked with different people during this period, but I must say that Murilo Plinio Nogueira Ribeiro and Rafael Gonçalves Bezerra de Araújo were the closest and more enthusiastic ones… and we worked together since the very beginning!

It was 2009 when I met Daniel Almeida Filho. By that time Daniel was studying Mechatronics and Medicine at the same time. He was Murilo`s colleague at the Mechatronics University and he had heard about our work building robots. He came to us with this challenge… Professor Ailton Melo, his mentor at the Medicine University, needed to build some sort of equipment for Parkinson Disease that required engineering knowledge regarding circuitry, software, sensors and so on.

When we first met, Daniel explained some of his ideas and at the end he said this one thing that may sound ridiculous… “What if you guys could do more than just robots? What if we could change history? What if we could do more for man kind?”… My first thought was “what does he mean with ‘just robots’?”… we are not doing ‘just robots’, as it seemed to me he was not giving the proper value to my work… but after a little while the idea of changing history started to take over me… could I really do more for man kind?

The way he said that… the way he truly believed in what he was saying… he was different from other people I had met so far… I was used to think I could accomplish the things I desire… But I was never aiming that high… And I was never so confident! No doubt Daniel is a dreamer, a researcher in the most pure essence… I was not so pure and I soon realized we needed him as part of our group.

We changed our focus completely… we were now engineers trying to learn and understand the Medicine world! The results came fast… we approved our first research project, a US$50,000.00 investment with no refund needed to develop a device we called MDG that addressed Parkinson Disease… by the end of 2009, competing as Master Degree Students with the project MDG, we won 1st place in the Innovative Ideas Contest promoted by FAPESB.

The year of 2010 started with some new ideas and after finishing the MDG project we started with the PARKIGLOVE project, another health related equipment that addressed the Parkinson Disease, and  competing as Master Degree Students with the project PARKIGLOVE, we won 1st place again in the Innovative Ideas Contest promoted by FAPESB.

In 2011 we submitted a Research Project proposal to FAPESP requesting governamental no refund money to develop and build the PARKIGLOVE project which was in a very early prototype version and aims to be a complete datalogger system to track and analyse Parkinson Disease tremor, something like a Holter Monitor but focusing Parkinson Disease (patent requested). We were ranked with the best score (9.28 out of 10) among more than 100 other research companys that also submitted their projects and our R$400.000,00 (about US$200,000.00) research project was approved.

Also in 2011, now competing as Researchers (a higher category where we competed with the best Researchers in our state) with the project PATC – Parkinson Active Tremor Control, we won 3rd place in the Innovative Ideas Contest promoted by FAPESB. The project is not in prototype stage yet.

Some years working as an Engineer developing Parkinson related equipment (software and hardware) made my way on taking my chances and submit to the Master Degree in Medicine/Neuroscience at UFBa.

I scored a grade 10 in my English proficiency test (and that helped me a lot) despite of the fact the the test was about a 3 page article on “Vascular access on Dialises patients and the use of Fistules” which I knew nothing about! After that each candidate had a 20 minute interview with 2 Professors and did OK on that too.

Getting in was not easy… but I had no idea what I had ahead of me… I was the only “non-doctor” among 40 students… first day of class I had to explain myself to the Professor who actually asked “You are an Engineer? WTF are you doing here?”

I had to study 10 times more than everyone… I would read same article not less then twice to make sure I could understand everything… I sometimes could not understand what people were talking about… I may have asked I couple of stupid questions… but at the end… I managed to get good grades in all disciplines and finished the program in the shortest period possible! Many of my so called “doctors” colleagues didn’t… so, yes… I am proud of myself! And I thank to all my friends and colleagues that helped me through this.

What I have learned from this experience? That being with people with different mindsets can make the difference in the way I see life! Medicine people have a different way of looking into problems… and I could not learn that being among Engineers only! I may or may not change history… I may or may not do more for man kind… but I shall live trying!