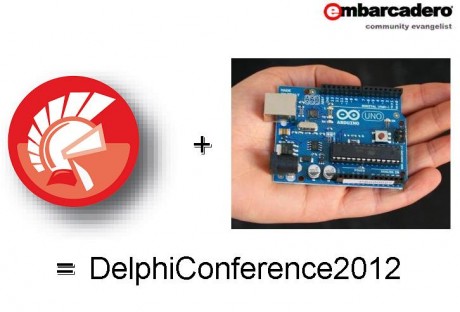 I have just received some great news! Both my submissions to Delphi Conference Brazil 2012 were approved!

In October 23, 2012, I will be speaking at Delphi Conference Brazil 2012, probably the biggest Delphi  event in the world (last year we had more than 700 developers gathered).

First I will be speaking and showing details on how we can use DelphiXE2 to develop an iOS app with an ON/OFF button, that when clicked can light up a lamp via ethernet!

This will be done by developing a DataSnap server to communicate with the iOS app and with a UDP socket client send messages to an Arduino board running a UDP socket server and connected to the ethernet network. At the end I will finish clicking on my iPHONE4S and “”the magic is done”!

The idea is to show people how we can use Delphi to go beyond most developers usualy think Delphi can go… and do things beyond forms, queries, etc.

In a second presentation I will be working together with Ricardo Boaro in a hands-on section about MAC environment setup and Firemonkey cross platform development.

I would like to thank Embarcadero and I am looking forward to see you all there!